I'm no dog I'm a dolphin
I just don't live in the sea
You feel my flow and you flood my brain
Show me your vision, your wild apparition
And sink to the depths of your soul

One love, we don't need another love
One love, one heart and one soul
You can have it all
Isn't it easy ?

You put me one step clear of the chain gang
And two miles over the line
Oh all the scenes I saw left me wanting more
Show me your vision, your wild apparition
And sink to the depths of your soul

One love, we don't need another love
One love, one heart and one soul

Your fruit's in season
And these feet fall sure and sound
And what goes up must come down
Turns into dust, or turns into stone

UK chart details:
One Love (Silvertone ORE 17) entered the charts on 14th July 1990, spending 7 weeks in the charts and reaching a highest position of 4.

"Like every great religion of the past we seek to find the divinity within and to express this revelation in a life of glorification and the worship of God. These ancient goals we define in the metaphor of the present - turn on, tune in, drop out."
(Timothy Leary, September 1966) 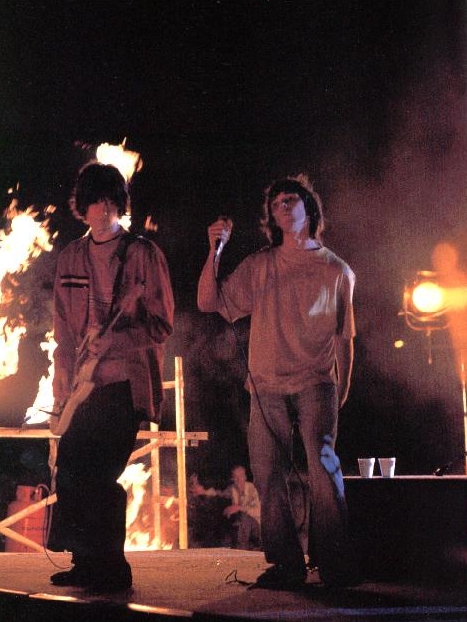 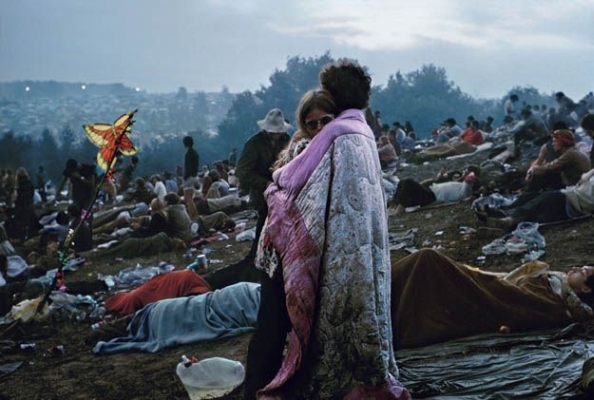 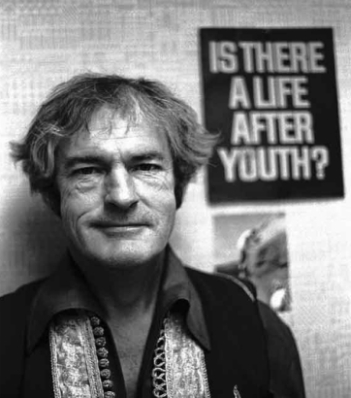 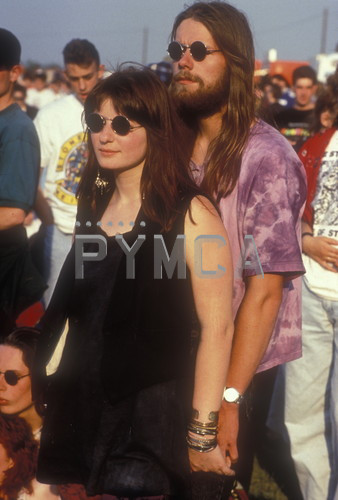 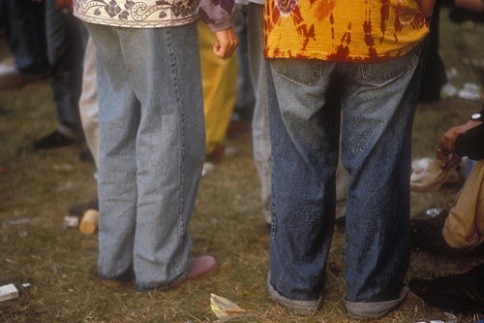 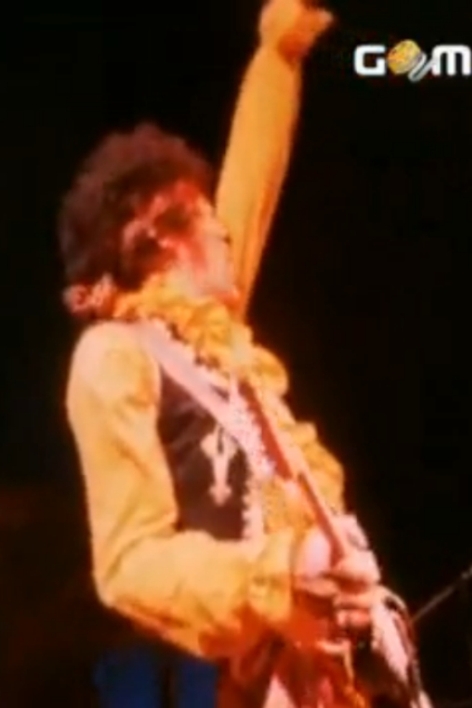 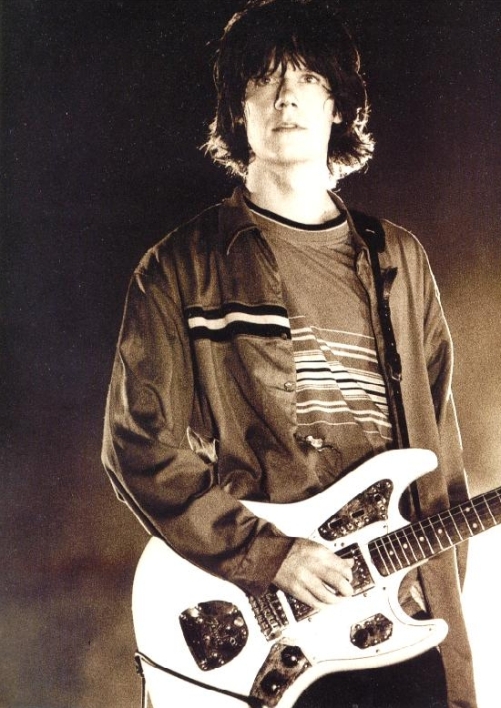 The Stone Roses were scheduled to be at Rockfield on the night of Sunday 28th January 1990, but did not appear, leaving producer John Leckie and the record company bemused by their absence. At about nine o'clock on Tuesday night, 48 hours late, the door opened and the band all stumbled in; giggling, and covered in blue and white paint, they told Leckie and engineer Paul Schroeder about their paint-splattering of Paul Birch. The band had been chaperoned by their tour manager, Steve 'Adge' Atherton, who warned them that the police would be arriving at any moment. Leckie got them to run through One Love and Something's Burning until four o'clock in the morning, and four hours later, the police woke the band (apart from Mani) and took them away. Mani was woken by the sound of tyres on the gravel, and peeked out of his curtains to see John and lan being helped into a police car. The police continued to knock on Mani's door but he refused to answer. Ian, John and Reni were kept in a cell from 11 o'clock in the morning, but the bassist and Steve 'Adge' handed themselves in at the police station at half past four that evening. The band spent two nights in the cells - one night in Monmouth, and another night in Wolverhampton - and had their fingerprints taken. Steve 'Adge' was released without charge. After the band's release from police custody on bail, they recommenced work on One Love and Something's Burning. Mixing the songs took six weeks: time enough for Leckie to travel to Seattle, produce an album by The Posies, and return to find the group and Paul Schroeder still embroiled in the task. Eventually, time was called, and One Love and Something's Burning were tentatively placed on Silvertone's release schedules. The single reached Number 4 in the UK charts, the Roses' highest chart placing to date, although musically it was something of an anticlimax after the high-water mark of Fool's Gold. After the release of One Love, things quickly began to unravel for the band. It was their last original release for four years, as manager Gareth Evans entered a protracted legal battle to wrestle out of the Silvertone deal, and sign with one of the corporate players who were expressing keen interest. After months of whispers - not to mention an injunction, preventing the group from recording any new material - the case came to court on 4th March 1991. By this time, the group had allied themselves with Geffen, who promised to meet all of their legal costs, if the tussle with Silvertone ended favourably. The band weren't confident of winning the case, but were determined to do or die. Had The Stone Roses not been released from their contract, they have refused to record for Silvertone, and thus were giving strong consideration to only releasing bootlegs, or simply touring. The case lasted two months, and in among the legal minutiae lurked all manner of nuggets: Gareth Evans' real name was lan Bromley, and it was revealed that his 10-year management deal entitled him to 33.3 per cent of all the band's earnings. The Silvertone contract could easily be construed as being rather one-sided. The label wasn't obliged to release Stone Roses records anywhere else in the world, and the group was only entitled to half-rate royalties on any greatest hits package. Perhaps most bizarrely, the reach of the deal was contractually defined as "the earth and the solar system." Evans was also alleged to have withheld Ł90,000 from the band. In May 1991, The Stone Roses emerged victorious, and Geffen signed the requisite cheques. Rumours suggested the deal was worth Ł20 million, and in the short term, there were more than sufficient funds to facilitate a brief period living the high life. Instead of knuckling down to recording, the band took Geffen's generous advance as their cue to jet off to the south of France, hiring a helicopter and staying in Ł500-a-night hotels for a few weeks. They flew into Nice first, chartered the helicopter from Nice to Cannes, then on to Saint-Tropez - staying in the luxurious Hotel Byblos - followed by Monte Carlo, where they were promptly kicked out of the casino. Some of Squire's Super 8 film from the trip was used for the video to their 1994 comeback single, Love Spreads. 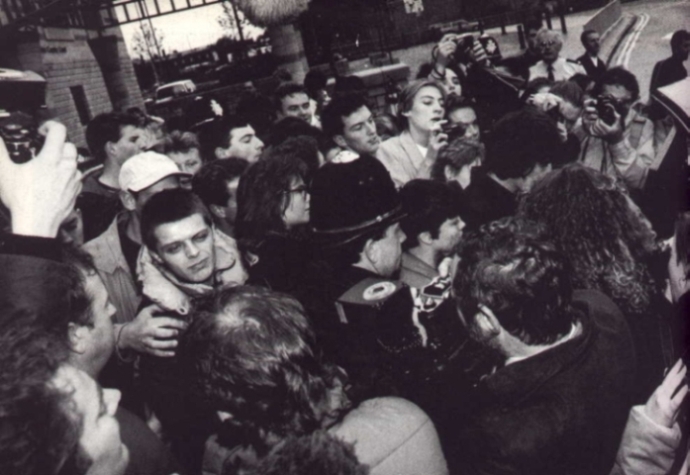 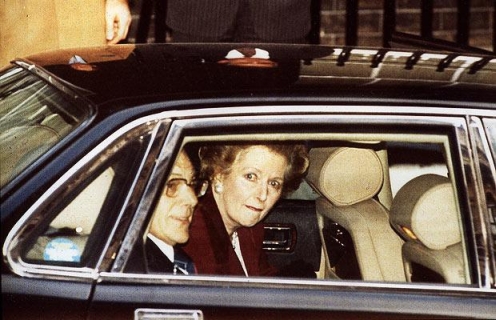 Top left: "...but we'll settle for Glasgow." Glasgow Green was Reni's final gig with The Stone Roses, and the band's last live appearance for nearly five years.
Top right: Originally scheduled for release in September 1989 with a working title of Any Time You Want Me, One Love proved to be the full stop on an era. Soon after its release, The Stone Roses would be shackled by legal proceedings, as they made a bid to break free from their Silvertone contract. Here, Mani and Ian are mobbed by fans and press as they leave court. Amidst this hiatus, the group's dynamics were beginning to shift. In the wake of Spike Island, Squire and Brown had been packed away on songwriting trips - to the Hebridean island of South Uist and a waterside cottage in the Lake District. Yet the creative partnership that produced the eponymous debut LP had effectively dried up. Squire began to write new songs alone, coming up with material which was altogether more rock.
Bottom left: The 1990s began with the release of Nelson Mandela from Victor Verster Prison, South Africa. He had been imprisoned for 27 years, for opposing apartheid and white-minority rule in South Africa.
Bottom right: After eleven-and-a-half years in power, Thatcher's reign came to an end in November 1990, and was replaced by John Major. A united stand against the introduction of the Poll tax, combined with Thatcher's belligerent stance against the European Community's plans for a common currency, led prominent figures to call for her resignation.

On the last and greatest day of the Feast, Jesus stood and said in a loud voice, "If anyone is thirsty, let him come to me and drink. Whoever believes in me, as the Scripture has said, streams of living water will flow from within him." By this he meant the Spirit, whom those who believed in him were later to receive. Up to that time the Spirit had not been given, since Jesus had not yet been glorified.
(John 7: 37 - 39) 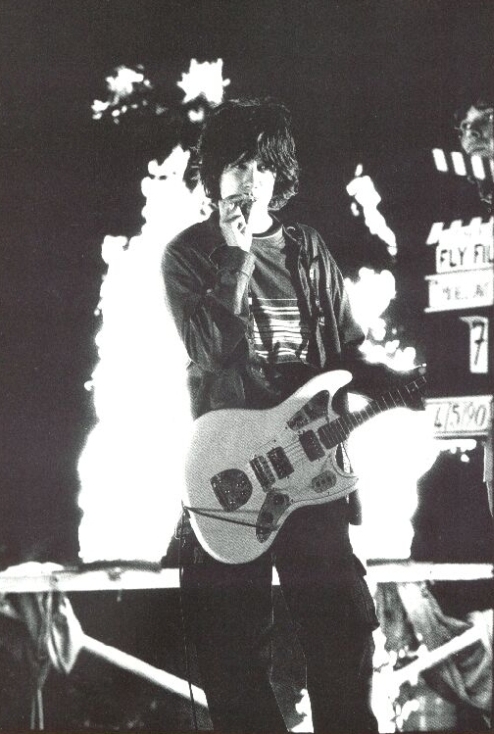 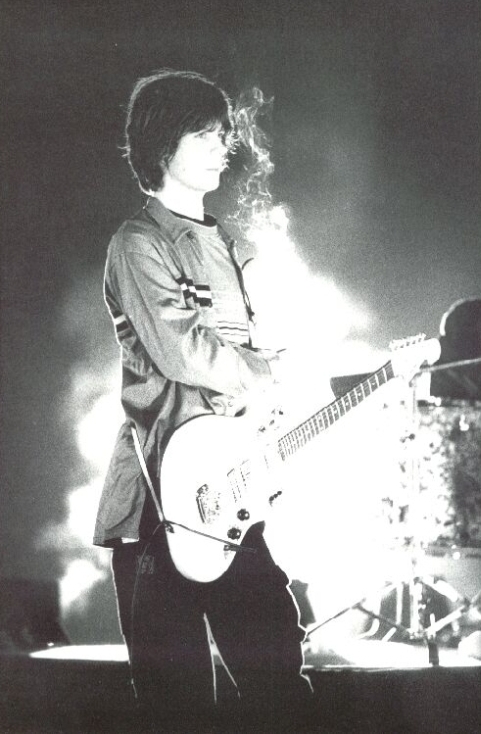 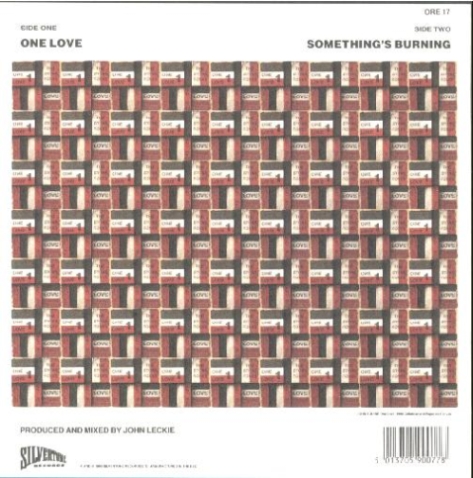 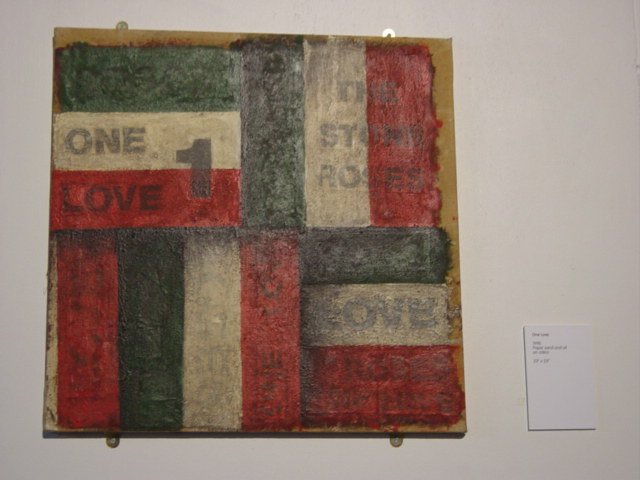 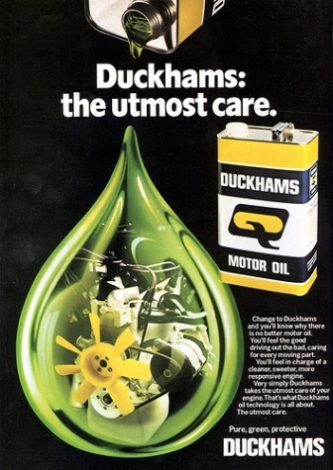 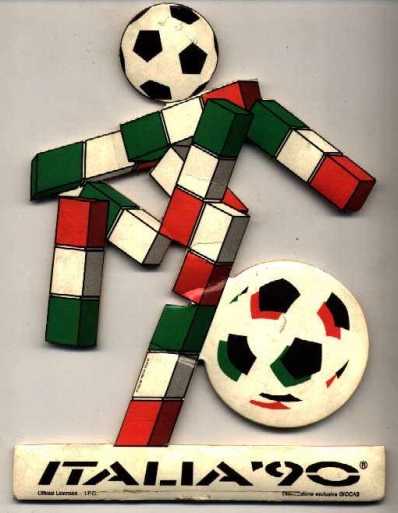 Top row: The One Love video was shot at Vector Television in Heaton Mersey, Stockport (4th May 1990).
Second row (left): One Love 7 inch front cover. The band had a choice between versions by John Leckie and Adrian Sherwood, and wisely opted for the former (the latter had too much Janet Jackson production values for Squire's liking).
Second row (right): One Love 7 inch back cover.
Third row (left): 'One Love' (1990), cellulose and paper, sand and oil on calico, 18" x 18", from the Manchester exhibition, May 2004. Alterations had to be made due to fears of a resemblance to a swastika: "That's another favourite. My brother (Matt Squire) photographed it and it was a little out of focus, I wasn't happy with it, but the deadline had gone for the artwork. The band were adamant that it looked like a swastika, so we had to change it. Someone's released the shirt now - I've seen people wearing it and I don't think 'What's the c*** doing with a swastika on his chest ?'. That was inspired by the Italia 90 logo and a Duckhams oil can. It's one of the few I took the time to paint on a canvas and stretch over a frame. A lot of the others are on bits of calico and stuffed in boxes. This one's in a large, plywood storage box near Morecambe with all my other possessions." (John Squire speaking to Select Magazine, November 1997).
Third row (right): Duckhams advertisement.
Bottom row: Italia '90 logo (left) and mascot.

Back To Turns Into Stone