If I could switch to an alternate theme
Live a double life
Chase the dream
Under no illusion
Under no thumb
I'd turn the clock back in a second, son

Can't hold back the tears anymore
Throw some sandbags round the door
Maybe I can drown in my misery
Whatever happened to you and me ?

Available on:
Time Changes Everything (3.51)

Details:
A song tinged with regret at the road not taken, by a man in search of lost time. Curiously, John Squire said in an interview that I Miss You was written not only towards Brown ("Acres of green grass going up in flames" refers to Brown's penchant for weed) but also to a former girlfriend. On The Gravy Train, Ian built on Dillinger's 'Cocaine In My Brain', and here one year later, Squire finds space there for Brown, with the amicable offering, "Still got you running round my brain." Such affability is not entirely without reservation, however, seeing as it is tagged to the aforementioned "Acres of green grass..." lyric. The third verse plays with 'The Love Song of J. Alfred Prufrock' by T.S. Eliot (1888 - 1965), which neatly ties in with the smoking habit of Brown:

Shall I say, I have gone at dusk through narrow streets
And watched the smoke that rises from the pipes
Of lonely men in shirt-sleeves, leaning out of windows ?...

Prufrock is the Everyman of modern times. Eliot's poem explores, through the introspections of the narrator, the emptiness and soulless quality of the bleak social world surrounding him. It is a drama of literary anguish, in which Prufrock is stricken with feelings of isolation and an incapability for decisive action. Prufrock laments his physical and intellectual inertia, the lost opportunities in his life and lack of spiritual progress, and he is haunted by reminders of unattained carnal love. It is interesting to note that it opens with a passage from Dante's Inferno (Canto 27, lines 61 - 66), as the opening song on Time Changes Everything, Joe Louis, also has elements of this. John Squire may have become aware of the poem through one of his favourite films, Francis Ford Coppola's Apocalypse Now. Eliot's poetry governs the film's climax; When Willard (Martin Sheen) first encounters Dennis Hopper, a manic freelance photographer and devoted disciple of Kurtz, the photojournalist tries to convey his own worth in relation to that of Kurtz by effusively reciting the above Eliot extract:

"Hey, man, you don't talk to the Colonel. You listen to him. The man's enlarged my mind. He's a poet-warrior in the classic sense. I mean, sometimes he'll, uh, well, you'll say "Hello" to him, right ? And he'll just walk right by you, and he won't even notice you. And suddenly he'll grab you, and he'll throw you in a corner, and he'll say, "Do you know that 'if' is the middle word in life ? 'If you can keep your head when all about you are losing theirs and blaming it on you, if you can trust yourself when all men doubt you'..." - I mean, I'm no, I can't - I'm a little man, I'm a little man, he's, he's a great man. I should have been a pair of ragged claws, scuttling across floors of silent seas..."

Page 38 of The Stone Roses And The Resurrection of British Pop: The Reunion Edition by John Robb describes a focal point for Ian and John, between Sale and Altrincham. In the fields near where they lived was a river and small nondescript bridge; could this be the "fields by the reservoir" of I Miss You ? 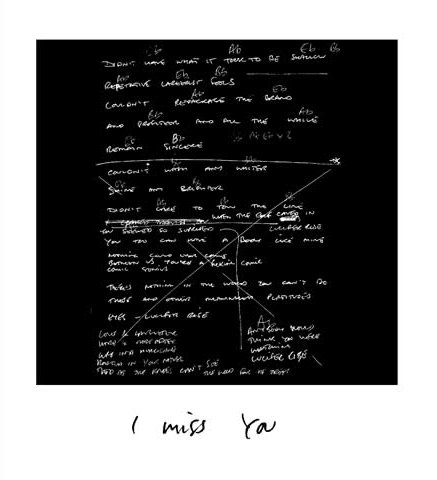 'I Miss You', a photograph by John Squire which features in the debut LP collage.