I've seen ya
You've never seen yourself
That's what you pay your shrink for
You're mean ya, thinking of no-one but yourself
What ya think all the love is for ?

Shut your mouth and bend down low
Sit back and watch the flowers grow
Yeah, people change but it was never a game
Go wash your face in your hands 'cause we all look the same

See no hear no, so why did ya go and speak so ?
Talking pouring scorn on the bone
I closed the door on your cold breath wish
You went and gave your tongue to the devil on a dish

"He became friends with a bag of cocaine. He put that before his friends."
(Ian Brown speaks about his communication breakdown with John Squire at the 1996 Reading Festival press conference) 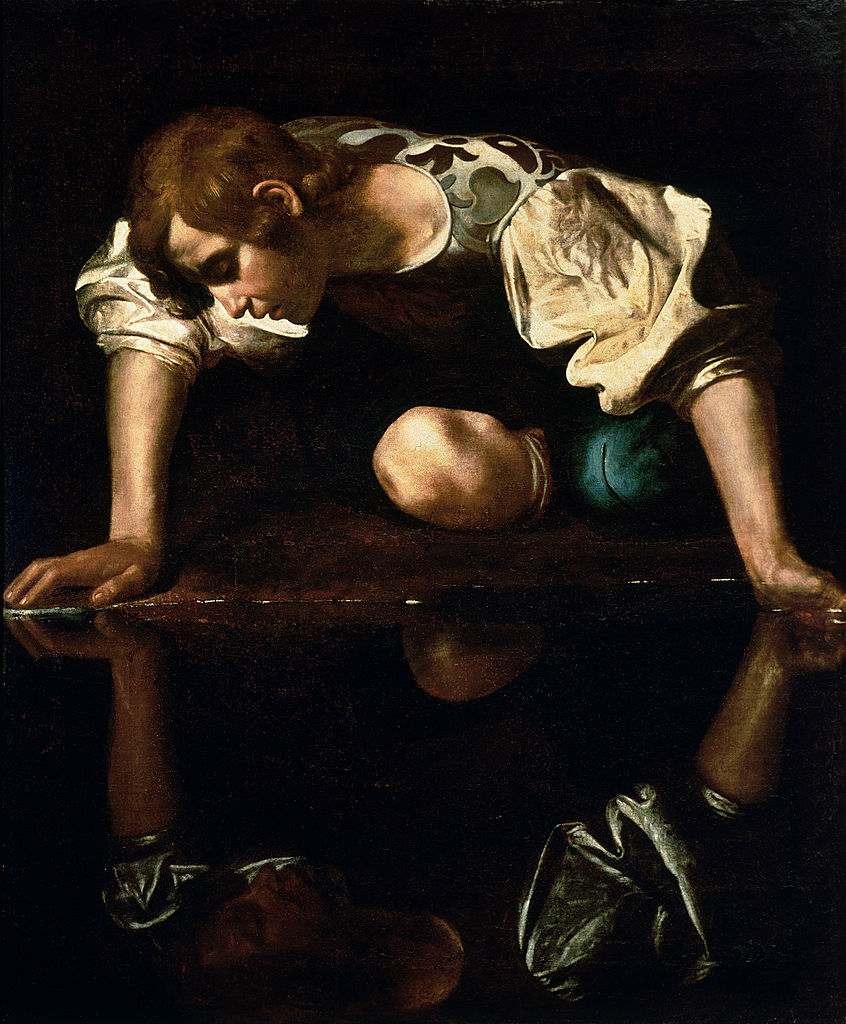 "Go wash your face in your hands 'cause we all look the same...". Narcissus by Caravaggio depicts Narcissus gazing at his own reflection.

Completed very quickly, the day after Lions, Deep Pile Dreams is Ian Brown's very own 'How Do You Sleep ?', a raw, emotive castigation of the Ice cold cube, for freezing the rest of the band out. The setting of the opening line of the chorus is the sandpit, in which Ian Brown, aged 4, and John Squire first met as children. Squire has stated in interviews that he remembers this moment, whereas Brown's memory of their first encounter was in their teenage years, when he defended Squire from a beating at school. Taking 'the flag' to refer to that on a sandcastle, Brown's assertion is that he retains the same values of youth, whereas Squire, in his view, succumbed to the drug culture of the rock lifestyle (sixty dollar bag of cocaine). Ian and John lived on the same street as teenagers; Ian used to "call to the kid next door", but the Second Coming era would test the relationship between the pair. Once upon a time, Brown was Squire's friend, the boy next door; drifting apart as adults, Brown was knocking on Squire's bedroom door, trying, without success, to coax him out (see the 1996 Reading Festival press conference). The disillusioned guitarist had found another game to play. "Sit back and watch the flowers grow" is precisely what Ian Brown considered doing after The Stone Roses wilted in 1996. Moving into an ex-council house, the singer contemplated mirroring the simpler life of his maternal grandfather, who used to grow flowers and take them to the market to sell. 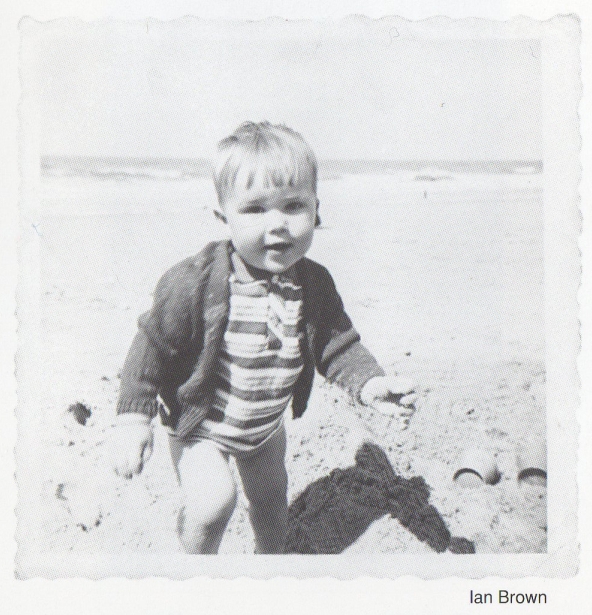 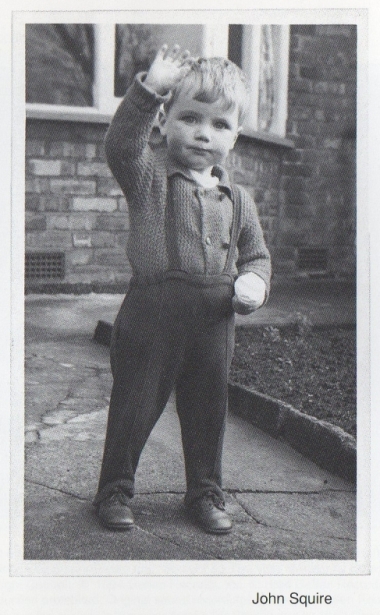 "I only ever wanted the one with the flag" ... Ian Brown (left) and John Squire (right) as children. The Stone Roses were each becoming parents in the interim period between their two albums and the tone of the Second Coming booklet reflected this, simply featuring childhood photos of the band. These photos of Mani and Reni completed the set. At the point of releasing Second Coming, Reni had two sons (he also had a nine year old daughter that he met for the first time only two years previously), Squire had a daughter and Ian a son. Mani became a dad soon afterwards. As a footnote, the first ever meeting of Jagger & Richards was also in a sandpit, in the playground of Wentworth County Primary school, Kent, in 1951.

This was a (Top Secret! inspired) headline from an interview that Squire gave to the NME in April 1996.

NME: The media was very cynical throughout the 'Second Coming' campaign. Did that affect you ?

Squire: "No, because I knew who I was before and I know who I am now. I think if I'd run away with the idea that I was somehow superior then any sort of rejection would have been hard to take."

NME: And do you think that is what happened with other members of The Stone Roses ?

Squire: "No. I don't know much about them, to be honest with you, which is a shame, but it's true. That's life I suppose, isn't it ? People change, relationships change, hairstyles change."

Squire gave this interview a fortnight after announcing his decision to leave The Stone Roses; only a five-minute phonecall was afforded to his songwriting partner and childhood friend. I propose that a lyric from the second verse is in response to Squire's headline-forming answer in the NME feature:

Yeah, people change but it was never a game
Go wash your face in your hands 'cause we all look the same

Brown sings 'Yeah, people change', indicative of the lyric taking the form of a response. 'It was never a game' is in reaction to Squire's aloofness that "relationships change... that's life." Ian identifies the relationship between the pair as much more than 'a game' in the music industry, as they had been friends since childhood. Given Squire's lack of communication with the band in 1996, Ian determines that he was not around to see ('see no') or hear ('hear no') what was going on, and therefore is in no position to speak categorically about band affairs ('so why did ya go and speak so ?'). Squire would have been well aware of the 'See No Hear No Speak No Evil' adage, having incorporated it into a Stone Roses photoshoot. In Ian's judgement, Squire 'went and gave (his) tongue to the devil on a dish' by selling his story to the NME. 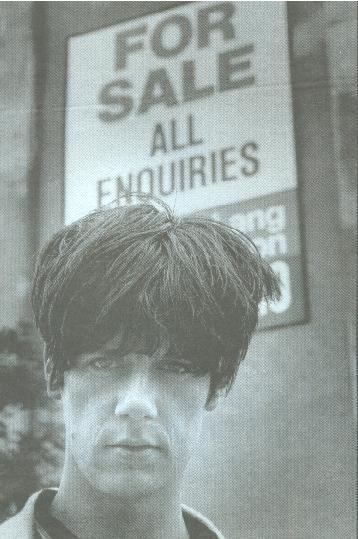 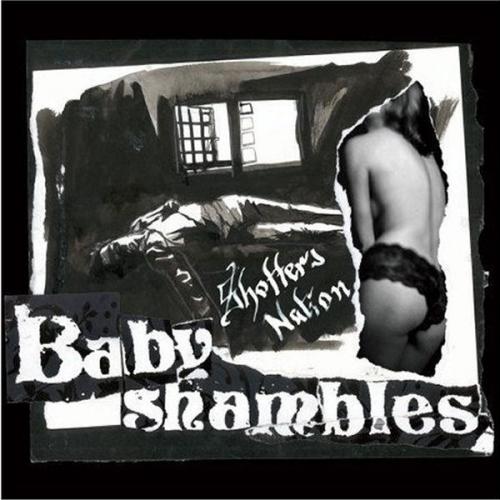 Left: John Squire puts himself on the market (NME, April 1996).
Right: Pete Doherty covered Deep Pile Dreams in a session with Babyshambles, and later used the final verse of the song on 'French Dog Blues', from the 2007 album, 'Shotter's Nation'. The song is credited as being written by Pete Doherty, Kate Moss and Ian Brown.