Am I one, one in a million
Or a million in one ?
Am I infinite, eternal and old ?
Painted with moonlight
This child of the sun
Walks the dark night of the soul

Hail, wind, ripping through my clothes
It's a fool, a parasite
An instant metropolis seems warm now
Guess I'm still learning to die

Am I one, one in a million
Or a million in one ?
Am I infinite, eternal and old ?
Painted with moonlight
This child of the sun
Walks the dark night of the soul

A little psychosis goes a long, long way yes it does
I try to be somebody else as often as I could
He'd say stop and I'll say go
Wrapped you tight and don't it show
Let me try to unwind ya
I know you're lost I'm gonna find ya

Details:
This track is also known as One In A Million. In this interview with Blakey Music, Chris Helme is speaking about his literary influences. He mentions 'The Bridge Across Forever' by Richard Bach, which provided the inspiration for 700 Horses:

"Yeah, I read a lot of books. I don't like poetry much. Well, it's not that I don't like it, it's just I don't write poetry. I read a lot of science fiction. Philip K Dick's great. My mate Dave Keegan got me into reading that. He's excellent. Mad. Last book I read was by Christopher Reich, which was called 'The Runner.' A pretty good book. As far as inspiration goes, I don't know really. It all sinks in from everywhere. But, books, I used to read Richard Bach books, like 'Bridge across Forever', and stuff like that. That was quite good for writing hippy-dippy lyrics. It does help to read a lot, actually, it really gets the lyrics coming, because, it's all words, that's all it is. It's all songs are anyhow. And someone might say something which I might forget about, and then it'll come into a song later on, and I'll think I'm a genius and I'm really original. Yet someone else has said it years ago, you know."
(Chris Helme speaking to Blakey Music, 13th February 2001) 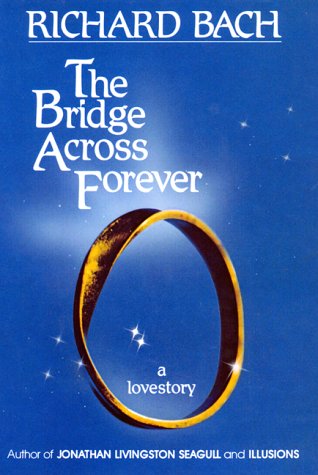 'The Bridge Across Forever' by Richard Bach.