Your Star Will Shine

When the storm outside is raging
And the dogs they howl your name
Lay down to sleep, I'll kiss you
Your star will shine again

Details:
Your Star Will Shine, the only song on Second Coming to clock in at under three minutes, was written at Rockfield by John and recorded very quickly. For the backwards guitars that run parallel to the acoustic guitar, Simon Dawson turned the tape upside-down and John learned the song backwards.

"This was written at Rockfield, by John. He demo'ed it in his bathroom with his Portastudio, so the acoustic had this very bright sound to it which we really liked. We tried to recreate that in the live room at Rockfield, using Nashville tuning on his acoustic, which sounds very bright, and added some chorus from a TC Electronic effects unit. This was one of the ones we used a sample to keep in time on. The clap noise is a real clap - three guys clapping, heavily EQ'd. We sampled them into the TC and then triggered the best one so it's smack in time, just to create a bit of percussion. There's also a floor tom, which is supposed to sound like one of those Irish drums, a bodhran.

"At first, we were just going to use the version we recorded as a proper demo. Reni wanted to play percussion at the same time as John was playing guitar, so we put him in the corridor. They came in and listened to it, and really liked it. I thought, 'we can't go with that', as it speeds up a little at the end of the intro. But they decided to go with that version, and we finished it really quickly, in three or four days."
(Simon Dawson speaking to Sound On Sound magazine, May 1995)

Christmas comes but once a year. Some things are worth waiting longer for. With a hint of Matthew 2: 2, Your Star Will Shine expresses John's concern that he will not be around to see his daughter, Jamie, grow up. The song has echoes of John Lennon's 'Beautiful Boy (Darling Boy)', written to his son, Sean. 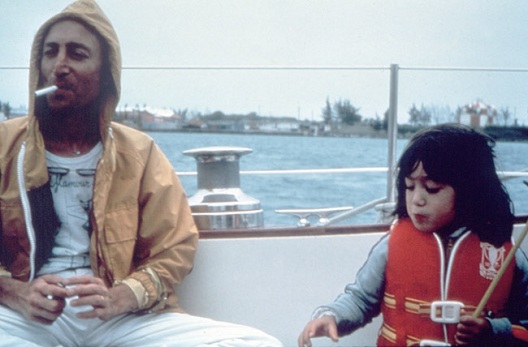 Left: Out on the ocean (Sean, Sean, Sean...)
Right: 'Our Dreams (Collaboration With Jamie)' (acrylic, household gloss on plywood, 4' x 8'). John Squire's daughter, Jamie, was also the inspiration for this 1989 artistic work.

The rehearsal sessions of this song, from the 'In The Studio' CD, expose Ian's vocal limitations. He has trouble keeping time with John, and the latter can be heard commenting on Track 10: "It just sounds like you've forgotten everything, everything we did before tea." This CD also features some rare singing by John on Track 6 (entitled 'Losing the melody') and Track 8 ('From 2nd verse').

Derivative, charmless and somehow manages to outstay its welcome, despite being the shortest song on the album.