Sick Boy: It's certainly a phenomenon in all walks of life.
Renton: What do you mean ?
Sick Boy: Well, at one point you've got it. Then you lose it. And it's gone forever. All walks of life. George Best, for example. Had it, lost it. Or David Bowie, or Lou Reed...
Renton: Lou Reed ? Some of his solo stuff's not bad.
Sick Boy: No, it's not bad, but it's not great either, is it ? And in your heart you kind of know that although it sounds all right, it's actually just... shite.
Renton: So who else ?
Sick Boy: Charlie Nicholas, David Niven, Malcolm McLaren, Elvis Presley...
Renton: OK, OK, so what is the point you're trying to make ?
Sick Boy: All I am trying to do, Mark, is to help you understand that The Name of The Rose is merely a blip on an otherwise uninterrupted downward trajectory.

A prime example of the sophomore slump. One of popular music's most accurate axioms is that second albums are the toughest, and the 347 ten-hour days spent in the studio to produce these 78 minutes of music is testament to this. The audaciously titled Second Coming was greeted by most of the music press with disappointment. Legal wrangles and increasingly fractious inter-band relationships meant the LP took five years to complete, by which time former devotees Oasis had taken the initiative. Aside from the fact that the product was simply not good enough, four main factors hindered the release of this LP:

1. The fact that it took too long and a generation had moved on. Britpop had kicked off, with Oasis riding a tidal wave of tribalism. There were no such anthems to be found here.
2. The sheer weight of expectation generated by both the five and a half year gap since the eponymous debut, and the band's withdrawal from the live arena for four and a half of those years.
3. The band gave their exclusive comeback interview to The Big Issue.
4. It was released two weeks before Christmas (think Mr Blobby... Mike Flowers Pops... you get the idea).

The album going through the hands of several producers did not allow for continuity; one glance at the back cover, detailing some of the most convoluted production credits in living memory, tells its own story. The album does contain some fine moments, but one cannot escape the impression that Led Zeppelin were covering the same ground some twenty years earlier, with much greater finesse and prolificacy. In the equivalent five and a half year period that it took The Stone Roses to record Second Coming, Led Zeppelin released Led Zeppelin I, II, III and IV, Houses of the Holy and had commenced work on Physical Graffiti.

Second Coming was dedicated to Philip Hall, the band's publicist, who died of cancer in 1993. 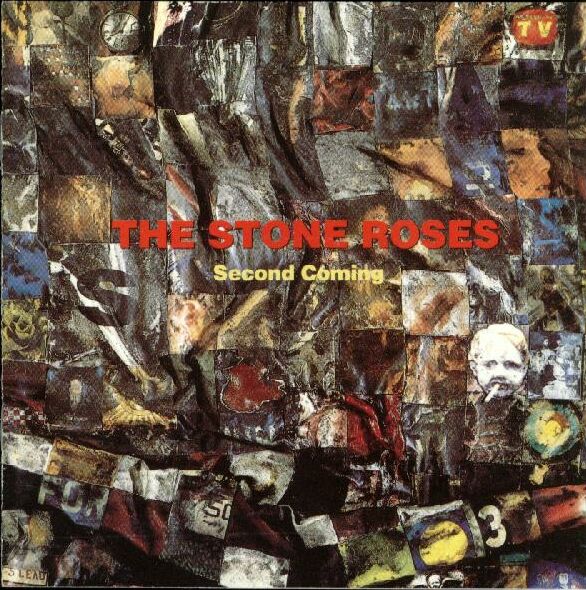 Left: Front cover of Second Coming. Beside the word 'Coming', there is a drawing of a naked, flaccid penis.
Right: Advertisement for Second Coming.