You're draggin' me, draggin' me down
Take me down
Show me around
But don't have me now
Cos I'm nobody now
You cannot help us now
You will not drag me down

You can have me whenever you want me

Pseudonyms:
'Draggin' Me Down', 'Whenever You Want'

Details:
Ian Brown's father, George - from whom Ian got his middle name - was a local joiner and his mother, Jean, worked in a paper factory. She also worked as a telephone receptionist at Warrington's BT call centre. Ian was the eldest child, with one brother, David, and one sister, Sharon. He grew up in Warrington until he was six and then moved to Sylvan Avenue, Timperley, South Manchester, with John Squire as his next door but three neighbour. At the age of eight, Ian's aunt gave him a large collection of seven-inch singles by acts such as The Beatles, The Rolling Stones and The Supremes. In 1972, he bought his first record, 'Metal Guru' by T-Rex. He developed a keen interest in Northern Soul, attending all-night events across the north of England. This style of music, originating in the north of England in the late 1960s, featured athletic dancing with spins, flips, and drops. The music at first consisted of obscure American soul recordings with an uptempo beat but by 1970, British performers were recording numbers for this market. Ian then became immersed in the punk scene, with the Sex Pistols in particular firing his extrovert rebellious streak. Brown and Squire both attended Altrincham Grammar School for Boys, where they achieved respectable 'O' Levels, and formed The Patrol in the late '70s, a punk outfit in which Ian played bass. Each also joined the Socialist Workers Party, selling papers and collecting money for the miners. The pair attended South Trafford College of Further Education, after which Brown tried his hand at a variety of different positions: kitchen porter at the Britannia Ringway Hotel in South Manchester (his duties included skinning cows' tongues, for which he was paid Ł1 per hour), caravan salesman in Poynton, civil servant, and working at the DHSS. He spent five years on the dole, before The Stone Roses secured a record deal in the late '80s. The Waterfront were formed in 1983, spawning a handful of jangling Orange Juice and Fire Engines influenced songs. In this Postcard Records inspired outfit, Squire encouraged Brown to try out on vocals, with a view to him sharing duties with Kaiser. In 1983, Ian held a party for his girlfriend's 21st birthday at his flat in Charles Berry Crescent, Hulme. Geno Washington, one-time leader of The Ram Jam Band (and inspiration for Dexy's Midnight Runners' first number one) turned up, having played a gig that night at Manchester University. "He told me that I was a star and I should be in a band. It was just a few days after John had asked me if I would sing, and I knew Geno was being honest. When he said it, I thought: I'll go with that. I've got to. I just had to."

The aggressive Getting Plenty is in the vein of Submission by the Sex Pistols', which contains the repetitive line, "down, down, dragging me down". Squire's biggest influence in the early Roses was The Clash but the Pistols, the fiery intensity and scowl of Johnny Rotten, was the biggest draw for Brown, who first became exposed to punk at the age of 14. Sex Pistols were, despite their short existence, the most influential British punk band. While The Clash were both more articulate and politically motivated, no other band so strongly exemplified the British punk movement's spirit and inherent contradictions or made such a lasting impression on British popular culture. Other notable punk influences on Brown were The Damned and Wythenshawe punk outfit, Slaughter & the Dogs, whose singles include 'Cranked Up Really High' (which Ian had emblazoned on his scooter) and 'Where Have All The Boot Boys Gone ?'. Ian saw the band at Wythenshawe Forum and the Belle Vue on several occasions and had close association with them, with his neighbour being a friend of guitarist, Rossi. On their first ever TV appearance, the Sex Pistols performed 'Anarchy In the UK' on Granada TV's 'So It Goes', presented by Tony Wilson; at the start of the song, Lydon shouts "Get off your arse !!!", the exact words shouted by Brown in an intro to Getting Plenty at Stockholm Lindigo Stadion, on 30th April 1985. On 4th June 1976, and again just over a month later, the Sex Pistols performed at Manchester's Lesser Free Trade Hall; among the small number in attendance at these two shows were a group of people who would help shape the subsequent Manchester music scene. These included Tony Wilson, Pete Shelley, Ian Curtis, Bernard Sumner, Peter Hook, Morrissey, Martin Hannett, and Mark E. Smith. This was Manchester music's 'year zero'. At early Stone Roses gigs, Ian Brown was intent on provoking reaction from what he perceived as apathetic audiences (listen to the Stockholm Lindigo Stadion performance, from 30th April 1985), on several occasions going into the crowd; even at Patrol gigs, Ian - bassist at the time - always ensured he had a microphone in front of him, illustrative of how, even at this early stage, the role of front-man was more to his preference. Surveying the audience in the predatory style of Johnny Rotten at early Roses gigs, Brown's persona later became more shamanic in tone. This theatrical style developed in the 1960s, with musicians soaking up the cultural influence of the Theatre of the Absurd. Jim Morrison of The Doors spearheaded this, incorporating the ideology of Julian Beck and The Living Theatre, in the creation of his onstage reptilian slithered persona, The Lizard King. 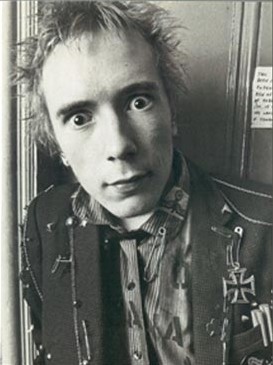 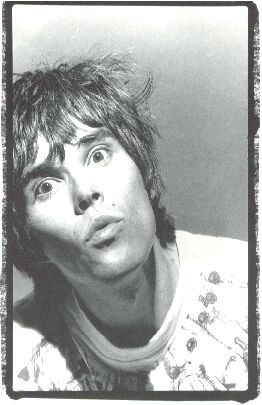 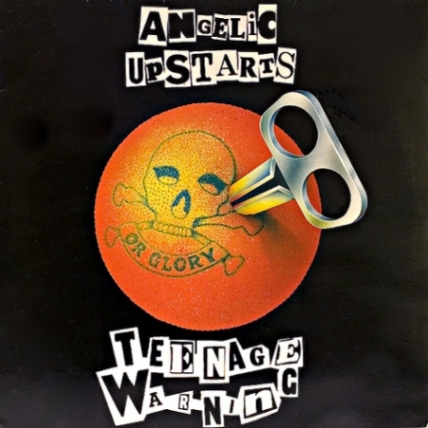 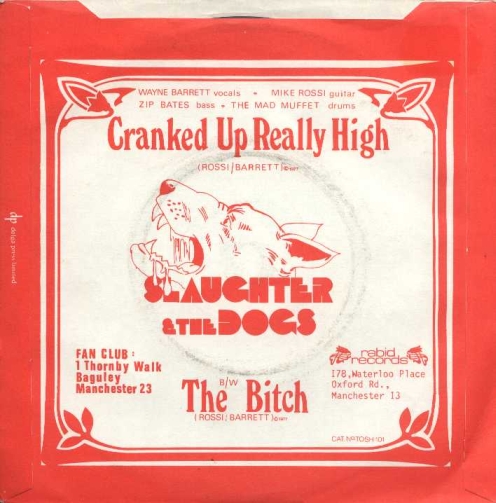 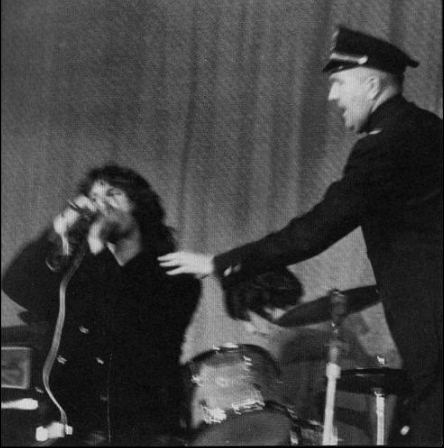 Top left: Johnny Rotten, the oracle of the punk generation, was the frontman benchmark for Ian Brown circa Garage Flower. Ian's confrontational persona, owing much to the acerbic individuality and malicious sneer of Rotten, was exemplified by one particular gig in which he approached a man brandishing a gun. During I Wanna Be Adored, the man pulled the gun out, waved it at everyone, and pointed it in the direction of the stage. Ian jumped off the stage and, still singing, approached the man, putting his mouth around the barrel.
Top middle: The wide-eyed, tilted head of Ian in press shots recalled the Sex Pistols frontman's malevolent projection, yet in a more measured form.
Top right: The Angelic Upstarts debut album, 'Teenage Warning'. Released in 1979, it included the singles, 'The Murder Of Liddle Towers', 'I'm An Upstart' and 'Teenage Warning'. The Angelic Upstarts, a punk rock/Oi! band formed in 1977, espoused an anti-fascist and socialist working class philosophy which was influential on Ian; he went to see the band approximately twenty times and roadied for them a few times. Vocalist Thomas 'Mensi' Mensforth was something of a mentor to him.
Bottom left: 'Cranked Up Really High' (1977) by Slaughter & the Dogs. "There was no-one about. There was The Smiths, New Order. I liked a few singles, but there wasn't anyone giving you a charge. We loved Slaughter and the Dogs. In 1985, we worked with Martin Hannett (releasing an ignored single, 'So Young', on Thin Line) because he'd done 'Cranked Up Really High', not cos of Joy Division and all that Manchester heritage. But Hannett was in a bad way. We caught him snorting coke off the 'There's No-one Quite Like Grandma' gold disc ! He was a junkie; lovely man, but nothing else mattered." (Ian Brown, Uncut magazine, February 1998)
Bottom right: Jim Morrison being arrested onstage.

From Ian Tilton's exclusive interview with this site, the following lyric may have been autobiographical on Brown's part:

So easy to approach me
I only keep with cut-throats

"I remember going to where Ian lived (Probably around 1988) on Chatham Grove, West Didsbury border. There were loads of rough looking guys in the house, real gangsters ! And Ian introduced me to them all quite casually. I'd never met gangsters in Manchester before. I soon came to realize that was just Ian's way. He makes friends very easily, takes people as he finds them."
(Ian Tilton speaks to This Is The Daybreak, 6th July 2002)

"Whenever I would go round to Ian's place he would usually have a house full of people. I also remember seeing Cesc and Fonzo at Ian's - the notorious Buller brothers who had this undercurrent of gangster-ism which they never dispelled, though they were good lads who Ian really liked having about. Alfonso was a DJ and would also organise nights and warehouse parties where he would go by the name MVITA - 'Manchester Vibes in the Area'. Well Alfonzo was a little bit cheeky but cool with it - had 'the walk and the talk' and all that, and was like the cocky one out of the whole gang. It was him who was the original one regarding that Oasis/Verve/Roses swagger, the first cool/cocky Northerner thing, a proper character and I suppose quite influential in that way."
(Ian Tilton speaks to online music magazine, live4ever, 16th June 2011)