Tom Sheehan speaks to This Is The Daybreak - 11th January 2007

TOM SHEEHAN worked for three years as CBS Records' first in-house photographer. His love for the music press led to him spending many years as a successful and respected freelancer (for NME, Sounds and Record Mirror) before committing to Melody Maker.

Tom's work has been featured in Uncut, The Times, The Guardian, Rolling Stone and countless international titles, photographing such artists as Madonna, U2, Beastie Boys, The Smiths, Oasis, and Radiohead. Included among his body of work is a session with The Stone Roses and several in their respective solo projects. I asked Tom if he could write about three photos featured on his website: one of The Stone Roses, one of John Squire and the other of Primal Scream (featuring Mani). Thanks very much to Tom for taking the time to write this piece. Included in the interview is an unpublished Ian Brown extract, which may feature in a book Tom plans to put together of his work. 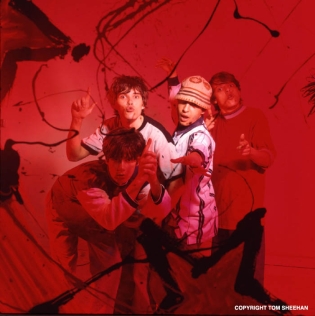 This was taken to Melody Maker. In fact, it was the first music paper cover they had. At the editorial meeting it was decided to put them on the cover ľ there were some doubts as the record hadnĺt been out, or was just about out. I remember Bob Stanley being quite vocal about them being on the cover. Allan Jones the editor agreed. I myself wasnĺt convinced at the time. Iĺd heard only one track and I thought it was like Status Quo when they went psychedelic (younger readers ask your grandad !). It wasnĺt until I heard the whole album that I got it. For some time after I was playing the album to death ! And still give it a blast once in a while. Itĺs a great album.

When it came to doing the session, I asked if John could bring some of his artwork. I did one shot shooting them through a perspex sheet that John had Ĺsplatteredĺ a la Pollock. Them being from up north and me from the sarf, there was that usual North v South banter going on. Reni was giving it the ôso have you heard any of our music ?ö I heard what he said but in my mind I heard a gauntlet hitting the ground. I said ôů hmmů I like the one about a waterfall !ö At this point, I knew I had a sparring partner for the rest of the session. He started banging on about cockney this and that. I pointed out that it had been many years since I photographed anyone wearing ĹLionelsĺ (= ĺLionel Blairsĺ = flares/bell bottoms). More fuel to the fire. It was a really good couple of hours. Needless to say, they hadnĺt really done a Ĺproperĺ session before, so there were a few things they werenĺt into. But overall it was a great session from my part, a good bit of verbal jousting and some good images at the end of it.

Almost ten years later, I was shooting Ian for Uncut Magazine. From the off, it was like we were old mates. What a friendly warm guy. I think he knew on my part in our first meeting ten years earlier that I was there to help. I had a third meeting with the great man a year or so after that. Around the time of Ianĺs first solo album, Carol Clerk and I met him to do a feature for Melody Maker. I managed to chat to Ian about that Stone Roses photo session - the following unpublished piece may feature in a book of my work that I plan to do at some point:

Ian Brown: ôItĺs the first proper photo session that we did. I remember he [Tommy] was up ladders. It was the first time anybodyĺs controlled the scene ľ ĹBe like thisĺ ľ composing the shots properly. And it was our first cover, too. It was in June ĺ89. Give me a week, give me a year, Iĺll tell you what I was doing.
ôHe [Tommy] was full of beans. It was your studio, wasnĺt it ? It had a petrol station in the front, didnĺt it ?
ô[Talking about the pout] I used to naturally go for pouting. You can see me doing it on that. Show the people ĹHow beautiful he isĺ !
ôYeah, itĺs a happy memory. It was a great day. It was like it was a proper photographer, your own studio, your own gear, the ladders and those big silver umbrellas. You knew what you were doing, so I was impressed. Plus, it was our first cover, which I was made up about. You were telling us about punk days and mod days.ö
[Tommy gives photo to Ian Brown]
ôThanks a lot. Great. Will you sign it for me ?ö 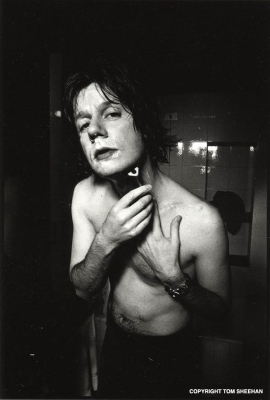 For a band that sometimes had a reputation of being a bit stand-offish, I have found them to be really chilled people. The thing with John is you have to remember what a creative guy he is. Not only for being a great British guitarist, but a bloody good artist. I went to the opening night of his exhibition at the ICA in London. A friend of mine, Patrick from The Vines, was gagging to meet him. I introduced them to each other, took a happy snap of the pair of them. Patrick was made up !

This shot of John shaving was taken out in Europe with The Seahorses for Melody Maker. Iĺd done some shots of John and Chris but wanted something that wasnĺt just a shot of him leaning against a wall. He said he had to get ready for the gig so I suggested shooting him doing that ! So I shot him shaving. Needless to say he didnĺt feel too good about it, but you gotta try something new once in a while.

Itĺs not the best picture of him, or one of the best I have taken, but at late Sunday afternoon somewhere in Europe, it was great. It was supposed to be an on the road feature, but we were only with them for a day. He was a sport to do it, but maybe regrets it nowů.. Itĺs only a photo !

This image was shot for Uncut Magazine. Iĺd done some shots of Bobby for the cover. When the Editor (Allan Jones) saw that Bob had his hair cut, he freaked ! He ended up using an old image of mine taken around the time of Screamadelica for the cover, fearing nobody would know who Bob was with his hair cut.

This trio shot was taken over the road from the pub. Mani has more energy than a dozen cats ! Maybe it was where they grew up or being in The Roses ľ whatever, they just seem to have a confidence without being flash. He is a dynamo ľ never stops and a very funny fucker, great company.