STEVE HANFT has directed music videos for Beck (Loser, Where It's At...), The Stone Roses (Love Spreads), Primal Scream (Kowalski, Star) and a wide range of other artists.

I asked Steve if he could share his memories of working with The Stone Roses. 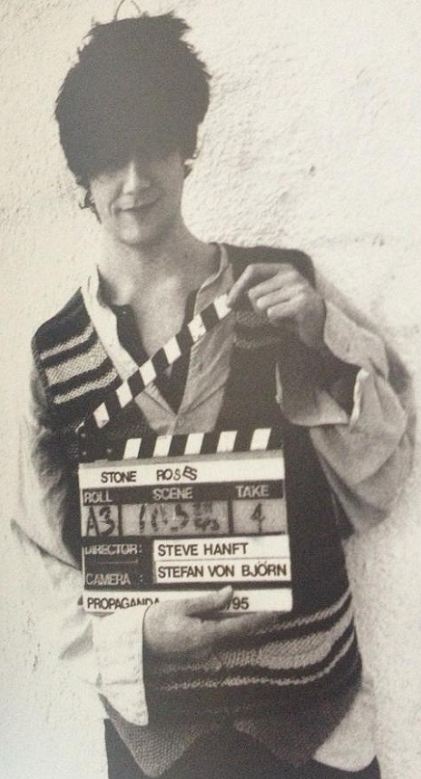 One day I was walking the immaculate sidewalks of West Hollywood, leaving a meeting I'd had about directing a video for Geffen Records, when out of the blue, David Geffen walks up behind. Says, "you want to direct a video for The Stone Roses ?". So I said, "uh huh". I didn't even know who The Stone Roses were, or that he was Geffen, until someone told me later, but I wasn't going to turn anyone down at that point.

When I heard the track I got pretty damn psyched until I found out that they already had a video for the tune Love Spreads, directed by The Stone Roses themselves. And I was supposed to improve upon their video with the same tune. I had the label send me the original Love Spreads video and thought it was dope. Honestly though, it was kind of a drag, that the video they had shot was awesome, and it was my type of shit too and that we were doing another. I kind of wished I could work with a new Stone Roses single, that did not already have a video. But Geffen wanted me to do Love Spreads, and hooked up a real budget. So I had do it, obviously it was a dope track and I needed the money, bad.

I penned the script in about an hour drinking coffee and beer at the same time. Chose an oil rig theme, because of The Stone Roses album title, Fool's Gold. I figured, that oil is fool's gold, if you think about it. And everyone knows oil's bullshit, even if they don't admit it, because it causes wars and death and massive environmental problems.

Anyway, the script was approved immediately and we began work on the set that night inside an old silent movie studio. It was a pretty stupid set, which I thought was pretty funny. It's a pub in the middle of an oil field that was obviously fake too. Ridiculous.

That night I met with The Stones Roses at the Chateau Marmont hotel. At first they seemed sort of uninterested in doing the vid, but were generally stoked to meet me. Said they dug my work. Ian said he was going to wear a Sherlock Holmes hat, and gave me one for myself, which I thought was well cool.

The morning of the shoot we assembled in the ancient 1920's studio and started reeling off 35 mm film like there was no tomorrow. My hommie Ross Harris got the best performance footage that day with some prime lenses on his camera, (the kind that doesn't zoom). I was rolling a hand crank 35mm film camera, the kind you see ancient cinematographers cranking in ancient films from a hundred years ago. It's the black and white footage, the shaky sprockety looking shit, you see in there that I shot.

The band was awesome to work with each in his own way.

Reni was hopping with energy, going mental all day, playing drums, riding the camera dolly, wearing eyeliner, and swinging from the chandelier.

John was quiet and professional and funny as hell riding the burro and playing the lead guitar.

Mani was just cool and fun, a real cool bass player, kind of radical to be around, cause he likes it. You can tell. He loves the music and vibes of getting creative. I worked with him on two Primal Scream videos after that too (Kowalski and Star). He was awesome every time.

Ian was kind of moody but super cool, you know ? When we were shooting some of our crew's kids were running around and Ian was digging our crazy California posse. I think he told my friend Ross, "I've got a little one at home like that one".

At one point I put a piece of black electrical tape over one of the extras front teeth, (my friend Martha Atwell's). She jumped up on the bar and started mountain dancing like a country fried acid head which was kind of funny. Beck did cameo panning for gold.

Years later, working with Mani on some Primal Scream videos I directed, he told me he didn't like my video for Love Spreads as much as the one that he and The Stone Roses made for the same tune. I told him I didn't like mine as much either, but that I didn't care, and I thought mine was pretty sick anyway, and we both cracked up laughing. I think he got a bang out a that.