Thanks to Matthew Mead for making this interview possible. 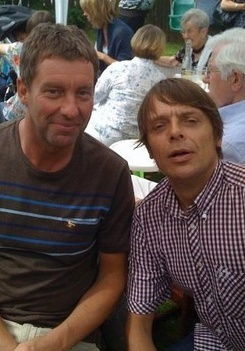 Often described as a "Manchester supergroup in reverse", The Hungry Socks were Martin Swinny (guitar, vocals), Clint Boon (keyboards), Chris Goodwin (drums), Andy McVittie (bass) and Carl Drinkwater (sax). After the departure of McVittie, Gary 'Mani' Mounfield replaced him on bass and Andy Housley joined on guitar. After moving from playing punk/psychedelic/Manchester covers (The Sonics, 'Psycho'; The Clash, 'I Fought the Law'...), the band wrote and gigged their own material around the north-west of England (song titles include 'Under The Covers' and '24 Hrs'). During the period the band were together, several members also undertook a recording project under the name The Mill.

I got asked by Periscope aka Swinny to play with his new band The Hungry Socks. No idea where the name came from but it was a very scary experience as I was told I was being picked up in a van on the day of the gig, having not ever had a rehearsal for the gig but also only meeting my new band members in the van on the way to a pretty much sell-out gig in Rochdale !!! We picked up various members, each introducing themselves along the way..."Hello, my name's Karl, I play the saxophone" !!! Fuckin' saxophone !!! Think that was the first time I ever saw a saxophone and now I'm supposed to play a sell-out gig with no rehearsals, no songs with my new best friends. Kinell...

...so yeah, as you can imagine we winged it with Swinny starting something on his guitar, bass player following the chords and then I'd come clattering in too fast 'cause I'm whizzed up. Then in would come some saxophone to spoil it all...only joking Karl ha ha...

After that first "show" we kept changing personnel, with Mani on bass (yes, that Mani) Clint Boon on organ, Swinny on vocals and guitar and Andy Housley joining on second guitar. One memorable night when we played at The Tommyfield pub, well, when I say we played, we actually got to soundcheck and every scally, scooter boy, mod etc who were our mates were in the pub and things were getting a little moody with the landlord and our bass player Mani. A massive argument broke out which resulted in Mani telling the landlord to fuck off and lobbing his bass at him, the landlord went crazy shouting the infamous words which have gone down in folklore around the Failsworth area, "I DON'T LIKE LIPPY LITTLE KIDS, AND YOU'RE A LIPPY LITTLE KID" !! That was our signal to trash the gaff, but making sure our gear got out safely. A few bumps and bruises later shaking off the security we ended up at the Irish Land League cabaret club. We asked if we could play there for free beer and we played a set of garage band classics, plus the odd Joy Division song. One very funny moment at this show was the compere for the evening. Clint Boon had a voice effect on the microphone he was speaking into and Clint would make the fella's voice into a Barry White type baritone, then next thing a high-pitched chipmunk on helium voice. It was hilarious and the punters wanted him to stay on talking rather than watch us play...can't blame 'em really ha ha...

It was around 1983 I think, I was living in Oldham and Mani who was a very close mate lived down the road in Failsworth as did Kaiser the singer, another cool lad. We used to get picked up for rehearsals in Andy Couzens' big American car, he had a '55 Chevy, bright red. He would drive all the way from Macclesfield to pick us up, then drive back to his house to rehearse, and then take us all home again around midnight. Then I had to be up for work at 4.00am as I was working in a bakery at the time. This was one of the reasons for leaving the band as I was totally knackered most days.

The recording session for Normandy (On A Beach In) and When The Wind Blows was recorded in a small studio attached to someone's house in Dukinfield, near Ashton. We would be doing a take and the lad's mum whose house it was would come walking in with a plate of Rich Tea biscuits !!! The crackling you can hear on the recording is probably us trying to eat biscuits...a hard thing to do whilst speeding your tits off I can tell you. For the track When The Wind Blows, we all had to stand round the mic to do the whistling bit, which took us forever because we couldn't stop laughing at each other. Trying to whistle seriously was just so funny, and trying to whistle in tune too, we must have done 50 takes...

One thing I did for Normandy was to play the drums stood up, and to play the drums with 2 bass drum beaters instead of drumsticks. I think I saw Moe Tucker playing the drums this style so was gonna give it a go. This was around the same time as Bobby Gillespie was doing the same with the Mary Chain, though not sure if I was before him !! The song was about Kaiser's expeditions abroad, mentioning various outposts in Northern France which was popular with the grafters in them days, but as the song suggests it wasn't all Lacoste and loads of money - you sometimes were on your arse. It's a fuckin' belting song, Mani's bass, Squire's and Couzens' guitars combining to make a lost classic.

The Waterfront didn't play any gigs whatsoever. We must have rehearsed a full set, but we were more occupied playing in Andy Couzens' house, which included a full-size snooker table, a swimming pool, and a brand new gadget at the time which nobody had...a video player !!! We spent hours watching Woody Allen movies, getting stoned and not actually doing much playing !!