This duet with Denise Johnson is a riposte to 'Three Lions', the official song of the England football team for the 1996 European Championships. Most football songs tended to espouse an unbounded optimism for victory; instead, Three Lions told of how, ever since 1966 and the one unequivocal success of the English football team, every tournament has ended in dashed hopes and the feeling that England will never again reach those heights. Despite the failures of the past, each tournament is greeted with fresh hope that this might finally be the year that the England football team does it again ("I know that was then, but it could be again"). The song's exuberant chorus proclaimed, "Football's coming home", derived from the tournament's slogan, "Football comes home", which in turn alluded to the invention of the modern game in England. This is Ian's explanation to Uncut magazine in February 1998 (the England-Germany game he refers to is the Euro '96 semi-final, in which Germany defeated England on penalties):

From the lyrics to Lions, it seems you considered quitting England ?

"Nah. I got the idea from the England-Germany game. I thought it was pathetic, grown men crying. Years ago there was a religious programme on BBC2, and they had a dread answering questions about his faith. And, as the credits went up, this dread's beating his staff going 'There are no liiions in Inglannd'. Why do they have lions in Trafalgar Square and on the England shirt ? There's never been lions here." 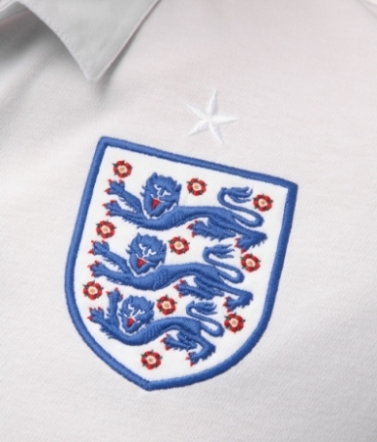 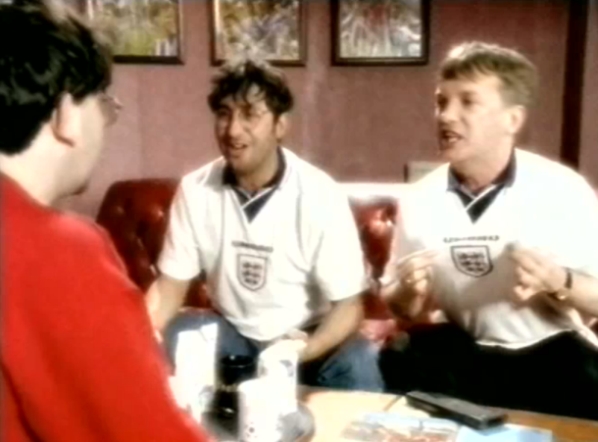 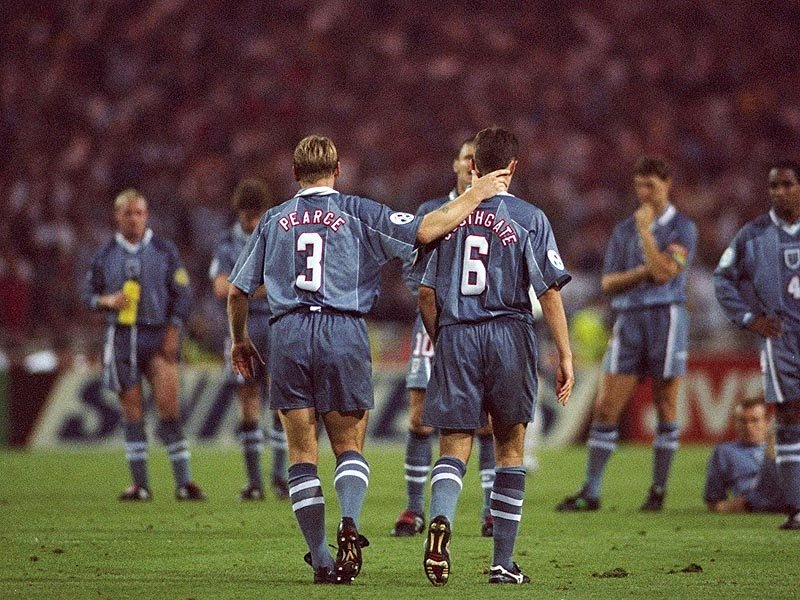 Top left: The England crest.
Top right: The 'Three Lions' video.
Bottom: Gareth Southgate is consoled by Stuart Pearce after his penalty is saved in the Euro '96 semi-final shootout versus Germany. The Britpop phenomenon was at its peak in 1996, and the involvement of The Lightning Seeds gave the song wide appeal. It stormed to number one in the singles chart, and as England progressed to the semi-finals, stadia around the country echoed to the sound of fans singing the song after English victories over Scotland, The Netherlands and Spain. The hopes of a nation were once again dashed in this tournament, when England lost agonisingly in a penalty shootout against Germany - and so the song's lyrics rang true once again; it has been re-recorded and released in subsequent football tournaments.

The whole of the final verse is aimed at cycling enthusiast John Squire. From here, the song takes on an arduous circuitous route, at one point breaking down.

I'll call your home - Brown stated in the 1996 Reading Festival press conference that he'd been knocking on Squire's door, but got no answer. This could easily double as "I'll call, you're home", in the sense that Brown is fully aware of Squire's unwillingness to open the door.

Then you start delivering - Cocaine.

Taking my time, then you start your quibbling - Also at the Reading Festival press conference, Brown argues that the rest of the band were prepared to sit back ("taking my time") and allow Squire to get 'his' album (Second Coming) out of his system, with the intention of becoming a more collaborative unit thereafter. However, the schism ("then you start your quibbling") in the Brown/Squire partnership would only become more pronounced in the coming months.

Now I know you're pedalling, you're still back-pedalling - Back to the peddling. This lyric is using Squire's keen interest in cycling as a metaphor for drug dependence. The guitarist found the discipline of cycling in this era to be a healthy counterbalance to rock star excess. His career having stalled, Squire is in suspension at this point, and soon regressing. 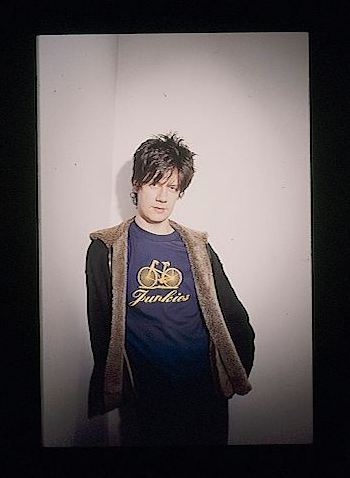 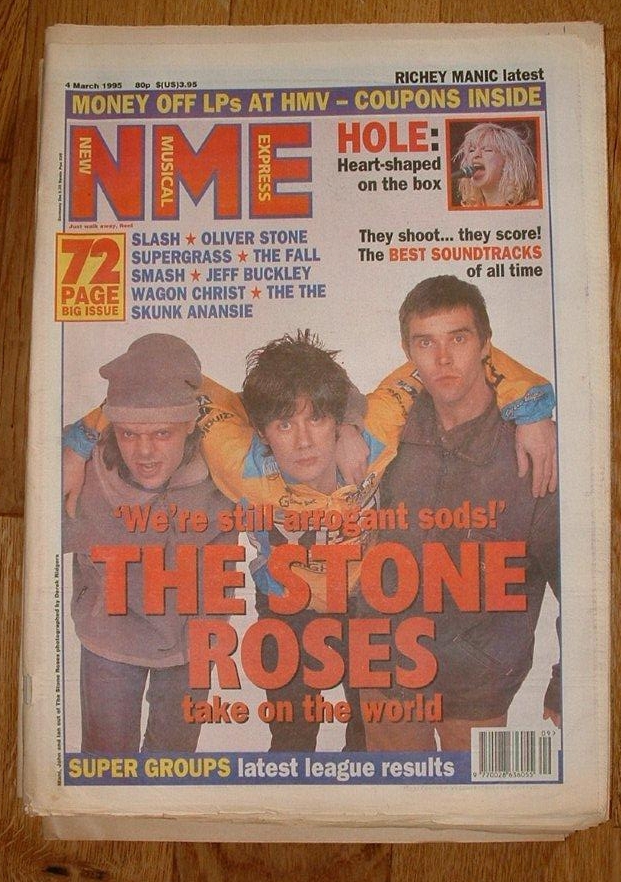 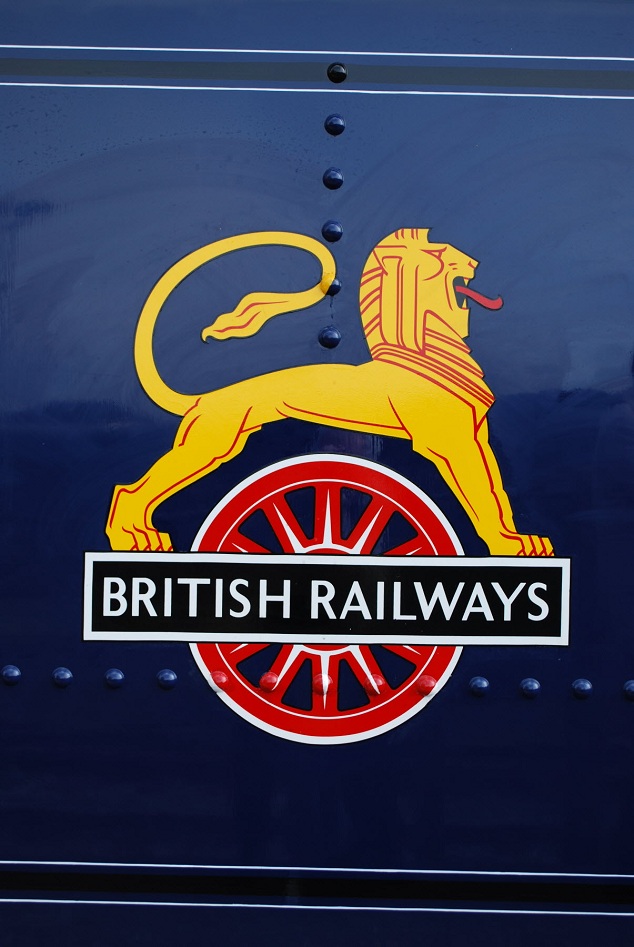 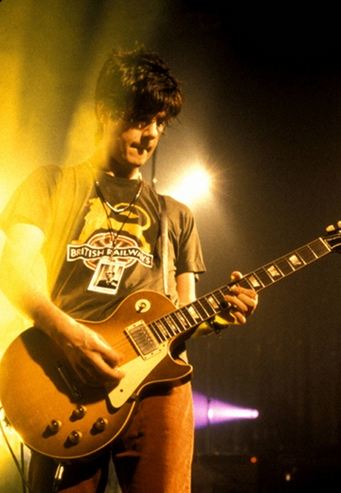 Top row: "Now I know you're pedalling, you're still back-pedalling..."
Bottom row: The 'cycling lion' (or 'lion on a unicycle') British Railways emblem, used on locomotives between 1950 and early 1956. The privatisation of British Rail was set in motion by the Conservative government in January 1993.