Think, think of a number
Think and choose a number one to ten
If five, five, five's your number
Times that five by two to make a ten
'Cause I, I ain't no number
Don't need no ID round my neck
So Mr number maker
ID cards don't stop no hijacked jet 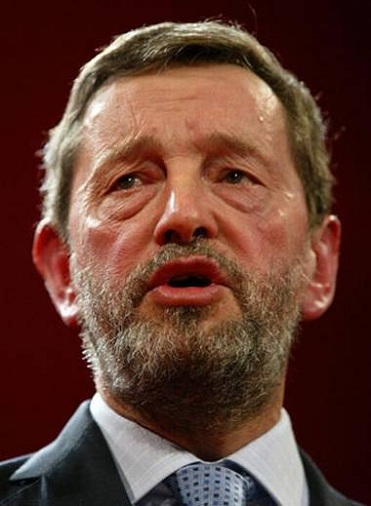 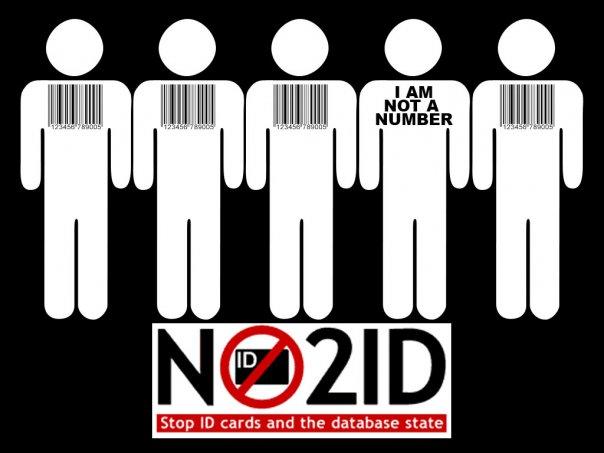 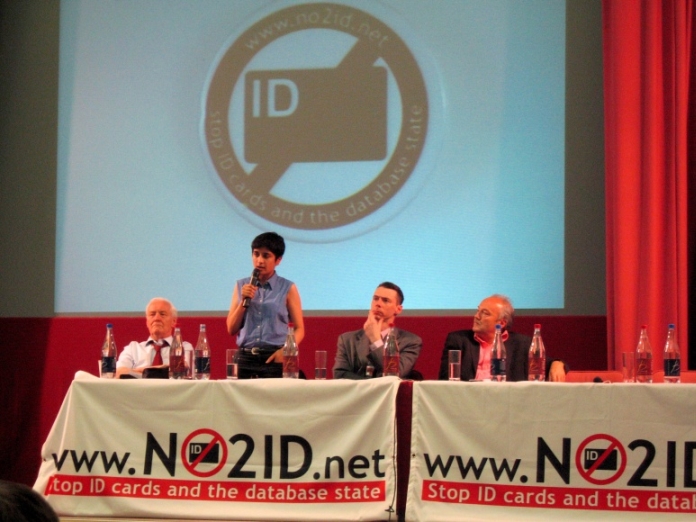 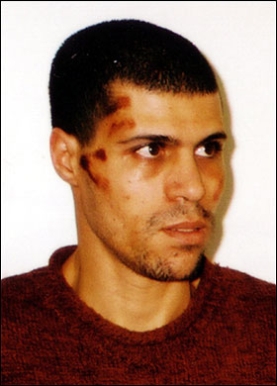 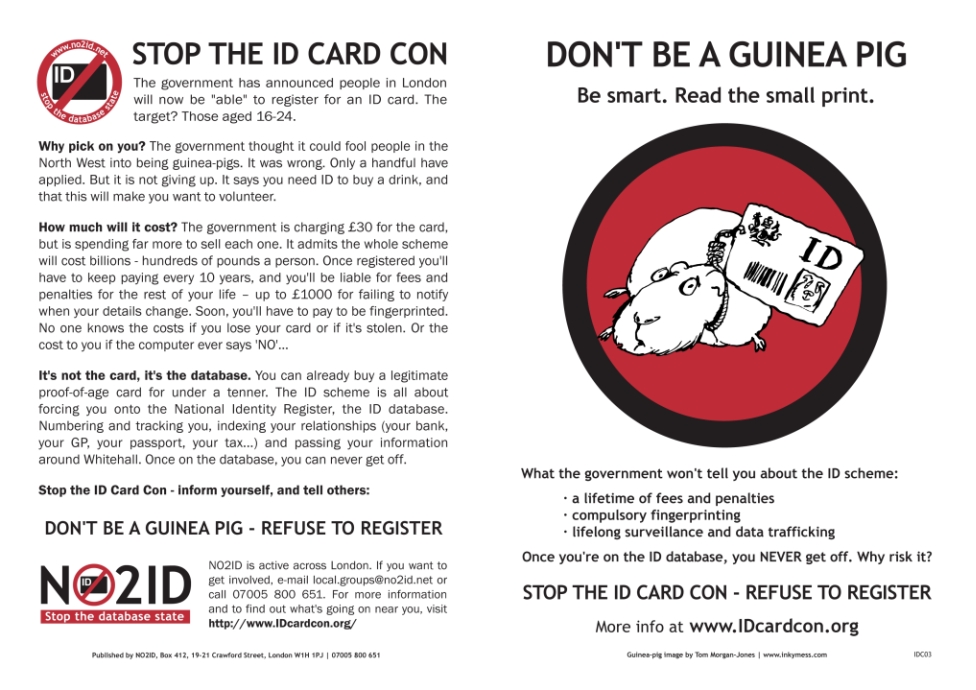 "I am not a number, I am a free man !" ...
Top left: 'Mr Politician', David Blunkett.
Second row (left): A NO2ID meeting in London, 2nd July 2005.
Second row (right): "It seems like they are going to bring these in through the back door, like they are for our protection. But they're not; they're keeping tabs on us all. I don't like the idea of a Big Brother society. The guy (Kamel Bourgass, pictured) who was picked up for ricin, he had a false ID. It's not going to stop anything." (Ian Brown speaking to EDP24, 17th July 2005). The Wood Green ricin plot was a 2002 bioterrorism alleged plot on the London Underground railway system, in which ricin poison would have been manufactured and used for an attack. It was believed the attack had connections with Al-Qaeda. Metropolitan Police arrested six suspects on 5th January 2003, with one more arrested two days later. Within two days, the Biological Weapon Identification Group, at the Porton Down Defence Science and Technology Laboratory, were sure that there was no trace of ricin on any of the articles that were found. This fact was initially misreported to other government departments as well as to the public, who only became aware of this in 2005. Reporting restrictions were in place before the public's perceptions could be corrected. The only subsequent conviction was of Kamel Bourgass, sentenced to 17 years for conspiring "together with other persons unknown to commit public nuisance by the use of poisons and/or explosives to cause disruption, fear or injury" on the basis of five pages of his hand-written notes on how to make ricin, cyanide and botulinum. He was already sentenced to life in prison for the murder of DC Stephen Oake, whom he stabbed to death during his arrest in Manchester. Bourgass also stabbed three other police officers at the same time; they all survived. All other suspects were either released without charge, acquitted, or had their trials abandoned.
Top right & bottom row: "ID cards don't stop no hijacked jet..." NO2ID was formed in 2004 to campaign against the United Kingdom government's plans to introduce UK ID Cards and the associated National Identity Register, which it believes has adverse implications for privacy, civil liberties and personal safety. The body raised concerns that Labour's plans had parallels with 1930s totalitarianism. Yes, Ian, ID cards don't stop no hijacked jet, but what fuelled that hijacked jet ?

Initial attempts to introduce a voluntary identity card were made under the Conservative administration of John Major, under then Home Secretary Michael Howard. At the Labour party conference in 1995, Tony Blair demanded that "instead of wasting hundreds of millions of pounds on compulsory ID cards as the Tory Right demand, let that money provide thousands more police officers on the beat in our local communities." Although included in the Conservative election manifesto, it seems that the proposal was halted by a Labour party victory in the 1997 general election. A proposal for ID cards, to be called 'entitlement cards', was initially revived by the Home Secretary at the time David Blunkett following the terrorist attacks on 11th September 2001, but was reportedly opposed by Cabinet colleagues. However, rising concerns about identity theft and the misuse of public services led to a proposal in February 2002 for the introduction of entitlement cards to be used to obtain social security services and a consultation paper, Entitlement Cards and Identity Fraud, was published by the Home Office on 3rd July 2002. A public consultation process followed, which resulted in a majority of submission by organisations being in favour of a scheme to verify a person's identity accurately. However, it was clear that the ability to properly identify a person to their true identity was central to the proposal's operation, with wider implications for operations against crime and terrorism. In 2003, Blunkett announced that the government intend to introduce a 'British national identity card' linked to a national identity database known as the National Identity Register (NIR). The proposals were included in the November 2003 Queen's Speech, despite doubts over the ability of the scheme to prevent terrorism. Feedback from the consultation exercise indicated that the term 'entitlement card' was superficially softer and warmer, but less familiar and 'weasely', and consequently the euphemism was dropped in favour of identity cards. Thus, the Identity Cards Act 2006 provided for National Identity Cards, a personal identification document and European Union travel document, linked to the National Identity Register. The introduction of the scheme was much debated, and various degrees of concern about the scheme were expressed by human rights lawyers, activists, security professionals and IT experts, as well as politicians. Many of the concerns focused on the databases which underlie the identity cards rather than the cards themselves. The Act specified fifty categories of information that the National Identity Register could hold on each citizen, including up to 10 fingerprints, digitised facial scan and iris scan, current and past UK and overseas places of residence of all residents of the UK throughout their lives and indices to other Government databases (including National Insurance Number) – which would allow them to be connected. The legislation on this resident register also said that any further information could be added and that those renewing or applying for passports must be entered on to the NIR. It was expected that this would happen soon after the Identity and Passport Service (IPS), which was formerly the UK Passport Service, started interviewing passport applicants to verify their identity. The Conservative/Liberal Democrat Coalition formed after the 2010 general election announced that the ID card scheme would be scrapped. The Identity Documents Act 2010 repealed the Identity Cards Act on 21st January 2011 and mandates the destruction of all data on the National Identity Register by 21st February 2011. The cards were invalidated with no refunds to purchasers. Foreign nationals from outside the European Union will, however, continue to require an ID card for use as a biometric residence permit under the provisions of the UK Borders Act 2007 and the Borders, Citizenship and Immigration Act 2009.

Co-written and produced by Darren Moss, the house-based Kiss Ya Lips (No I.D.) is critical of measures to introduce National Identity Cards in the UK - see also 'Integral' by The Pet Shop Boys, from their 2006 album, 'Fundamental' (Neil Tennant cites the scheme as the reason for his well-publicized support of Tony Blair's Labour Party coming to an end). 'Last Bongo In Brighton' by DJ Format, from the 2003 LP, 'Music for the Mature B-Boy', is a musical influence, while the line "'Cause loose lips sink ships" is taken from 2Pac's 'I Get Around', from his 1993 album 'Strictly 4 My N.I.G.G.A.Z.'

Finger tips on the hips as I dip, gotta get a tight grip, don't slip
Loose lips sink ships, it's a trip
I love the way she licks her lips, see me jocking
Put a little twist in her hips 'cause I'm watching

The phrase has its origin in World War II posters that stressed the importance of discretion for the Allied war effort. Millions volunteered or were drafted for military duty during World War II. Some of these citizen-soldiers had little idea how to conduct themselves to prevent inadvertent disclosure of important information to the enemy and so the government provided guidance to remedy this. Central to maintaining national security was the Office of War Information's drive to limit talk about the war in both the public and private arenas of civilian life. Silence meant security. 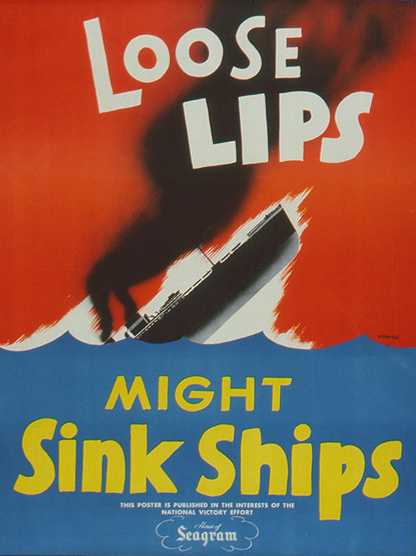 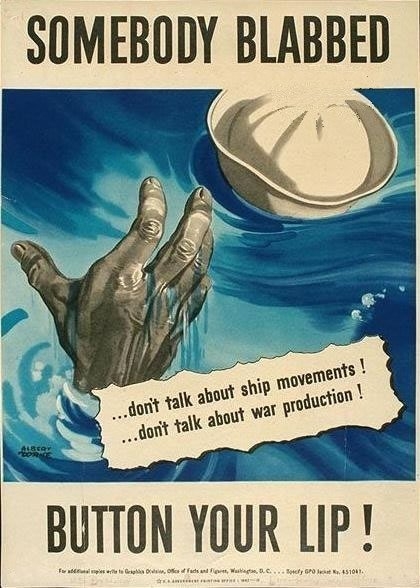 On this note, the Texas/Lexus rhyming on Illegal Attacks is most probably lifted from 'Shame on a Nigga' by the Wu-Tang Clan.