Keep What Ya Got

When your halo slips for good
You'll have to wear your hood
Good to feel the breeze of fear
On all the cynics, I'm ya mimic
All you losers, all abusers
Wasting all my precious energy


"Give away all that thou hast, then thou shalt receive."
(An old Greek maxim)

The Jungian-flavoured Keep What Ya Got (a phrase tailored by Alan Aspden, father of Adidas designer, Gary Aspden) is a rework of 'Teotihuacan', a Noel Gallagher penned song that featured on 'The X-Files: Fight the Future' (1998) soundtrack. Lyrically, the song lifts from The Beatles' 'Yesterday' ("Yesterday came suddenly"), Simon & Garfunkel's 'Mrs Robinson' ("Heaven holds a place for those who pray"), and revisits Waterfall ("Now you're at the wheel. Tell me how, how does it feel ?"). This collaboration with Noel Gallagher marks a u-turn somewhat on the part of Ian Brown as, up until this point in his career, he had often been heavily critical of Oasis*. His appearance with Noel Gallagher on the Jonathan Ross show (series 7, week 2) was also a little surprising, given his stated dislike of the programme. "It may seem like a cliche but we will not compromise. We will not do what we don't want to. We wouldn't go on Jonathan Ross because we don't like the programme. I don't care if we could be seen by nine million people. We've got more self-respect than to stand there and have fish thrown at us. (Ian Brown speaking to the NME, 30th December 1989). Of the two, notably only Noel was interviewed, but both performed at the show's end. Ian's Q Legend award in October 2007 was presented to him by Jonathan Ross, and the pair hugged before Ian gave his Kylie-bashing acceptance speech. Liam Gallagher is known for watching Ian's moves closely, and this was evident on Oasis' subsequent appearance on the show (series 8, week 7). At one point in the interview, Ian - seated in the Green Room - made a disparaging hand gesture to Ross when the camera went to him, which was replicated by Liam Gallagher above (Ian's gesture seems to have been edited out of the online version available to view. Please email me at Paul@Thisisthedaybreak.co.uk if you are able to provide a clip of this). After the reformation of The Stone Roses in October 2011, Liam was immediately on the airwaves, proclaiming how he would like Oasis to do likewise and reform for the 20th anniversary of '(What's The Story) Morning Glory ?' in 2015.

* Ian repeatedly called Oasis "shit" at a solo concert that I attended in Derry, Northern Ireland.

- He described them as "babies pretending to be The Beatles." (NME interview, 21st March 1998)

- Can you understand how the Gallaghers went so 'Met Bar' ? (Richard Goodwin, Manchester)
"The Met Bar is for successful people who can go out and mix together without fear of getting mugged. Will it affect their music ? I don't think their music's been any good anyway." (Jockey Slut magazine, March 2000)

Approaching the release date of Keep What Ya Got, however, Ian was placing Noel in the pantheon of the all-time rock guitarists, alongside Keith Richards. Laugh ? I almost bought Be Here Now. 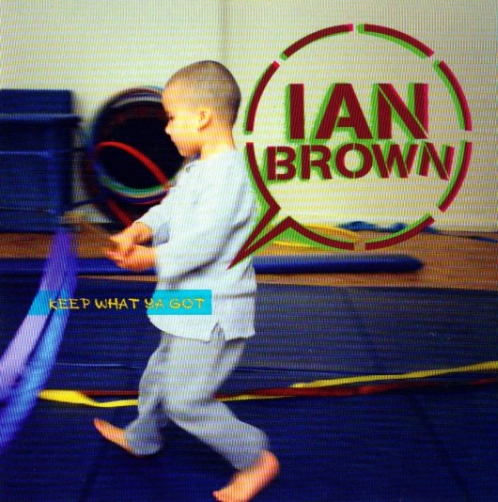 Keep What Ya Got cover artwork, which shows Ian Brown's son, Emilio.