She got no soul yeah

Details:
Babasonicos are a group of musicians in Argentina whom Ian Brown collaborated with for this track. This indignant finale perhaps channels anger from the singer's 'air rage' incident aboard a British Airways flight from Charles De Gaulles airport to Manchester airport, on 13th February 1998. The air stewardess on that BA 1611 flight, Christine Cooper, had been asking passengers if they would like to make any duty-free purchases. She thought that Brown had gestured towards her affirmatively in response, but soon realised he had simply been putting something into his pocket. She told the court: "I realised I had made a mistake, and I offered him an apology with an open palm gesture. As I was about to continue, I heard him shout: 'Hey you'." Ian was alleged to have used threatening behaviour towards both her and Captain Martin Drake. Ian allegedly told the stewardess, "Don't wave your fucking hands at me. I'll fucking chop them off." Ms Cooper went on to explain, "I was immediately shocked at the response I got from doing nothing wrong. I apologised but he kept up the abuse in a threatening way, pointing a finger with a menacing tone. I was terrified... it was an individual threat to me." She said he threatened her four or five times. Upon intervention of Captain Drake, Ian allegedly told him, "If she points at me again, I'll chop her hands off." Ian also allegedly told Captain Drake, "piss off and have a shave, Pugwash." As the British Airways flight began its descent into Manchester Airport, Ian allegedly ran towards the cockpit door, and hammered on it for 20 to 30 seconds. At the trial, Ian admitted telling Christine Cooper he would "chop her hands off" - but claimed it was intended as a joke. He also admitted tapping on the cockpit door, but claimed this was only for the purpose of obtaining names of the crew in order to make a complaint. Brown denied using threatening and abusive behaviour towards Ms Cooper and Mr Drake. Ian had his appeal against the case thrown out in November 1998, after Judge Simon Fawcus said he was guilty of "disgraceful and loutish behaviour." Not helped by having 'previous', Ian was subsequently banned by British Airways from all the company's flights. The singer was sentenced to 60 days in Strangeways prison, but was released on Christmas Eve 1998, having served only half of his jail term.

"She [the air hostess] asks me if we want duty-free and she waves her hands dismissively. So I says 'don't wave your hand at me.' So she says 'OK' because she knew there was no need. So I say 'Sorry, it's OK but if you do it again I'll chop it off.' Five minutes later, the captain runs out, right up to the kid who's sat next to me, nose to nose [saying] 'Who's got a problem ?' I said 'I've got a problem 'cos she's got no manners.' He said 'It's my plane and I've had to stand up.' 'So go and sit down.' So he went and sat down and that's when he phoned the police. They said I was pissed out of my head and I'd gone wild, but I don't even drink."
(Ian Brown speaking to Muse magazine, 21st April 2000)

In February 1998, on a flight from Paris to Manchester, Brown became involved in an argument with a stewardess. She summoned the captain, and Brown, complaining that the staff were rude, hammered on the cockpit door. On landing, he was charged with threatening behaviour on board an aircraft. He maintains that he was made an example of: "To send a message out not to mess about on aircraft - but I never messed about on no aircraft. I didn't even swear." That October, he was sentenced to 60 days in Strangeways prison. He bristles with indignation: "I got the same as Gary Glitter. I was sent away for words I'm supposed to have said, and I didn't even say the words they put me away for. He had 4,500 images of kids..." He trails off, shaking his head. "And me and him get the same sentence." He says that, when he was taken from the courtroom, the jailer wouldn't jail him, because he'd seen the Roses play. "He said, 'It's Ian Brown, I can't do it, I love 'im.'"
(Ian Brown speaking to The Guardian, 2nd February 2002)

When your primary mode of defence is 'I'm not as bad as Gary Glitter', then you really are on a sticky wicket. Nice to see some acknowledgement of a moral spectrum here, but I don't see why Ian Brown is any more holy than Gary Glitter ? 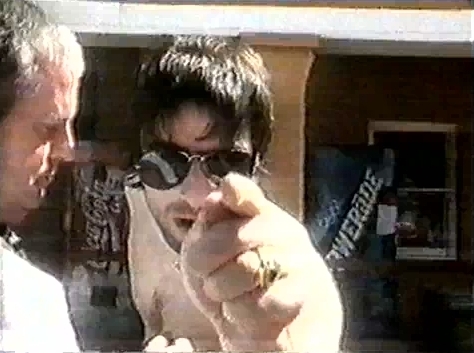 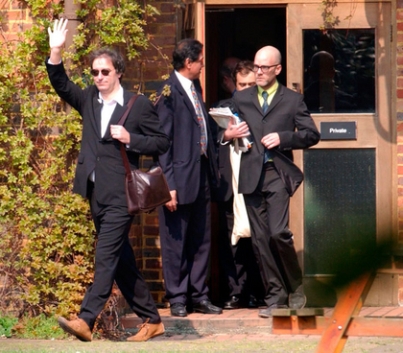 Left: "I'll tell you kids... I'd rather walk." Later that very same month (February 1998), Liam Gallagher - who has an uncanny knack of following in Ian Brown's footsteps - was involved in his own 'air rage' incident, on a Cathay Pacific flight from Heathrow to Sydney. Passengers on the flight complained of drunken and offensive behaviour from the Oasis frontman, which was reported to have included smoking, swearing and throwing objects at staff. He was promptly banned from Cathay Pacific airlines for life. Seen here speaking to the Australian press about the incident, Liam's threat to the captain via television broadcast - "If I ever meet that fucking captain again... I'll stab him" - were quite close to Ian's alleged words to the stewardess and general belittling of the captain on the plane.
Right: An 'air rage' incident that Ian Brown draws parallels with is that of Peter Buck. The R.E.M. guitarist was accused of attacking two cabin staff and covering them in yoghurt, claiming "I am R.E.M.", and trying to steal a knife on a British Airways flight from Seattle to Heathrow in April 2001. Bono from U2 testified as a character witness at his trial, where Buck blamed his behaviour on a reaction to medication. He was cleared of all charges at Isleworth Crown Court. "If you've got money you stay out of jail, don't ya ? Look what the guy from R.E.M. (guitarist Peter Buck) did on a plane. He was raging drunk and attacking people, but you've got Bono and a load of millionaires in a courtroom. There's a footballer over here called Vinnie Jones who threatened to kill all the stewardesses. If I'd have gotten expensive lawyers, I would have walked out of the courtroom, simple as that." (Ian Brown speaking to Richard Thomas of djmixed.com). It could indeed be said that later, Ian was not entirely averse to employing the Pop Star: Get Out of Jail Free card himself. On 25th April 2011, the singer was caught doing 105mph (breaking a 70mph limit) on the M6, near Sandbach, Cheshire. Representing the singer was Cheshire lawyer Nick Freeman, who is dubbed 'Mr Loophole' for helping a string of celebrity clients appearing on driving offences. It proved successful, with Brown receiving a fine of Ł650 and six penalty points on his licence, but avoiding a driving ban at Chester magistrates on 24th October that year. Freeman argued that a driving ban would have caused Ian "insurmountable" difficulties in relation to seeing his 11-year-old son who lives in London with his mother and in attending Stone Roses band rehearsals which are taking place at "a remote secret location." Alison Warburton, prosecuting, told the court that Brown was caught speeding on the M6 northbound, near Holmes Chapel, Cheshire, on 25th April this year at around 12.30am. She said a police officer followed his car for five miles and that he drove at 105mph for about a mile. His speed never dropped below 94mph, the court heard. The police officer then pulled Brown over, who disputed that he was driving that fast and initially entered a not guilty plea to the charge. Freeman, in defence of Brown, stated that "It's an extremely quiet car and doesn't really give much sensation of speed." (Just as well there is a speedometer in the vehicle then...). Soon after, in November 2011, Ian received his third speeding sanction in four years, for driving at 93mph through motorway roadworks where the limit was 40mph, and was banned from driving for three months. The singer appeared before Stoke-on-Trent magistrates court, where a district judge told him his speed went "off the scale." He was caught on camera on the M6 near Stafford in his Ł40,000 Lexus on 12th October 2010, as he headed home to Cheshire. District judge David Taylor told him: "Speed limits are not imposed on a motorway unless there are very good reasons. Those reasons are almost always concerning public safety." His barrister, Craig MacGregor, said Brown also used his car to shop for his elderly parents. He was a "caring father and family man." The court heard how the singer had initially denied the charge, claiming that the "camera must be wrong" because he "could not have been going at 93mph", before switching to a guilty plea at the last minute. He was also fined Ł900 and ordered to pay costs of Ł1,015. Judge Taylor warned he would face prison if caught behind the wheel during the disqualification period. He ordered that the six penalty points from Brown's previous offence on the very same motorway in April of this year should remain on his licence. Freeman, in his defence of Brown, reiterated the claim that a driving ban for the singer would be "literally insurmountable" for The Stone Roses' rehearsal prospects. One would imagine that the many millions of pounds rolling in from reunion ticket sales (that three-night residency at Heaton Park alone raked in an estimated $19 million gross revenue for the band) will suffice to fund Brown with a lift of some description. Leave your house a bit earlier. Clocking up 12 points in 2016, Brown again escaped a driving ban. Along with the trademark "band rehearsals" shtick from Brown's lawyer Paul Reddy, a ban, it was argued, would prevent Brown from delivering groceries to his parents. Why Ian is the only person on God's green earth capable of making these life-saving Lexus drops, I do not know. They do online grocery delivery nowadays, I hear ?

Back To Golden Greats